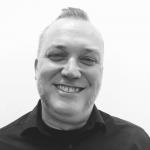 Mick got his CELTA in 1999 and worked in Madrid for a year before returning to London. He subsequently worked in Rome before completing his DELTA at King’s College London in 2002. After arriving at Oxford House College in 2007, Mick taught the Overseas Teacher programme for several years before becoming a CELTA trainer in 2010.

Mick got his CELTA in 1999 and worked in Madrid for a year before returning to London. He subsequently worked in Rome before completing his DELTA at King’s College London in 2002. After arriving at Oxford House College in 2007, Mick taught the Overseas Teacher programme for several years before becoming a CELTA trainer in 2010.

Mick was born in the small village of Mancot near Wrexham in North Wales. From an early age, music became an all-consuming passion and he spent almost every penny, including his lunch money, on records. He took up the guitar and found out that his singing voice was not too bad so he formed school bands and played a few local gigs. When he was seventeen, Mick ran away to London to become a musician, making several punk and rockabilly albums. This passion continues today and he is still to be found on stage somewhere in the capital. Mick is also an avid reader and loves music biographies and sci-fi. His favourite authors are Terry Pratchett and Michael Connolly.

How did you get into teaching English?

I was at a loose end and exclusively being a musician wasn’t paying the bills! A friend offered to pay for a course of my choice, in order to give me a direction. I’ve always been interested in English and fancied the idea of travelling, so I chose CELTA.

Where have you traveled (both for teaching and for fun)?

I’ve taught in Spain and Italy, both of which I loved, and I’ve been lucky to play gigs in many European countries, including Germany, The Netherlands and Lithuania.

When did you realize English teaching had become a career for you (not just a means of travel)?

Well, my first summer teaching was very unsuccessful. In fact, I was let go. I don’t think I understood how to do it meaningfully. So I decided to go to Spain with nothing and force myself to do it properly with no distractions. It was a revelation! I learnt how important English can be in a person’s life and how much good instruction is valued. I learned from some very experienced teachers and the better I got, the more interested I became. I came back and immediately did the DELTA.

How has travel changed you as a person?

I think it opens you up to different ideas. Coming from a quite closeted community, I hadn’t been exposed to other religions, political and social ideas or even interesting food! It’s why I love London so much. Everyone is here, we all live on top of each other and it works.

What led you to become a CELTA teacher trainer?

After my DELTA, I  carried on as usual for a while and eventually found my way to Oxford House College. I learned that it was a training college and that there were some amazing trainers here. I learned so much from them that I became interested in the idea of progressing to teacher training.

What advice would you give people looking to travel abroad for the first time?

Leave your emotional baggage where you were and jump in with both feet. It’s a new start and a new experience. You quickly find that there is so much you don’t know about the world or its people. Soak it up.